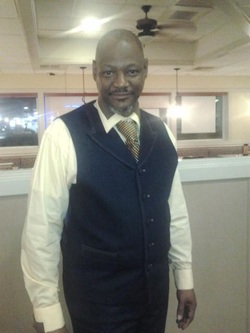 Biography
There is just so much to say about a man whose legacy will
withstand the test of time. A man whose love for the Lord needs no other
description except for his life's work. Brother Mhoon  is such a man. He is a man
of kindness, compassion, depth, wisdom, direction, spirituality and love

The road down gospel music stardom started for Brother Karl at the young age
of 9. He was born and raised in the small town of Vardaman Miss. Calhoun Co.

He was saved at the age of 11 in the city of New Albany Miss. Golden Gates
Church of God in Christ. later after high school he join up with the (M.M.C.)
Mississippi Mass choir in 83 to 85. working with powerful and anointed mens of
God. bro David Curry, Rev James Moore, Bro. Jerry Smith, Bro. Frank Williams.
along with the williams brother of smithdale mississippi. this is where the
Lord  gave him the gift of playing. Who would have ever thought that young Robert Karl
would  grow up to become a musician. at this time he was a member of the Gordon Chapel Church of God In Christ of Houlka Mississippi under the late Elder Eddie Donaldson.

He later moved to Miami Fla. Hurricane Andrew
blow him up north here to the city of Evansville, Ind.  with no
directions,. the Lord lead him to a church called Johnson Temple Church Of  God In
Christ in Evansville, Ind. under the late Elder Robert L. Johnson. a coulpe years roll around
the Lord Blessed him there, he got married to Kathleen Cooper in 1994 and
the Lord blessed them to build a four bed room Habitat Home and to help others
build theirs in 1995.

Brother Mhoon became the District Minister of Music of the Greater Southren
District under the Leadership of Supt. David Johnson of the lifetime COGIC of
Patoka Ind. 2006 under Bishop B.A. Sanders Indiana 2rd Jurisdiction.  stayed
there until the Lord said your work here is done.

He lead me south, 2009 to the Unity District under Supt. Grimmett as pastor
of the Ky. 2rd Jurisdiction under the leadership of Bishop Bell.